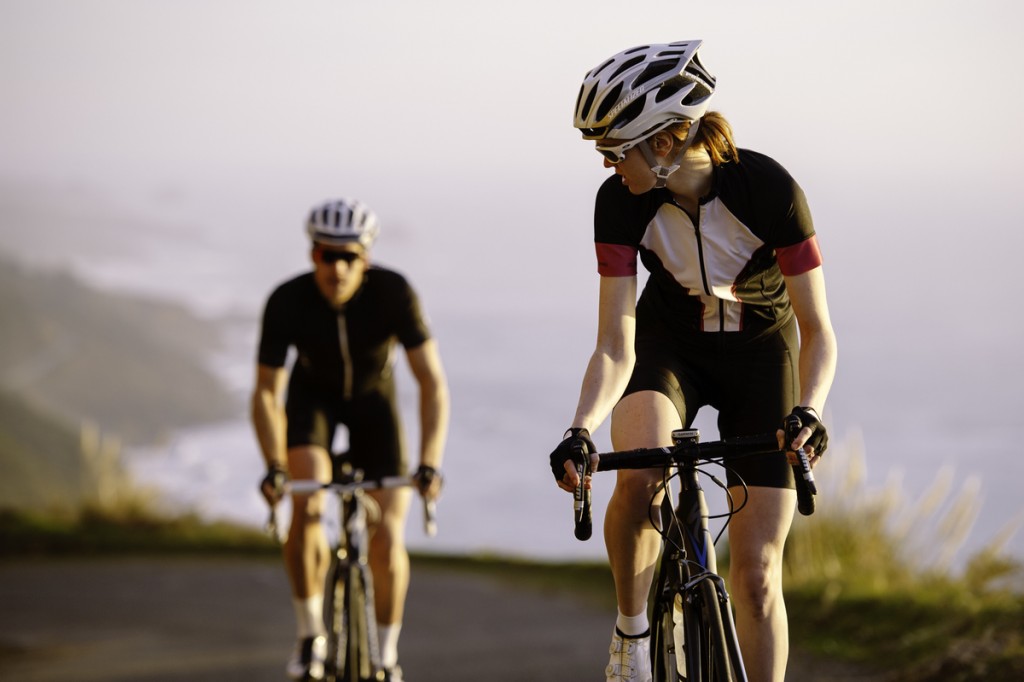 Sexism is arguably a growing problem in numerous industries. From the gender wage gap, to Olympics discrimination, these pressing social issues rewind the clock back to the 1920s. The bike industry, unfortunately, is no different. Here we rank some of the bike industry’s worst marketing fails.

Coming in with moderate discrimination accusations, is the sexually alluding naming of
Giant’s bike line, Liv. While they have made slight changes since the inception of their women’s bicycle line, they have kept such names like Lust, Adore, Invite, Obsess, Tempt, and Enchant. These names arguably represent the notion that women are seen as objects for a man’s pleasure, even in the world of cycling, and not as the talented bike riders they can be. 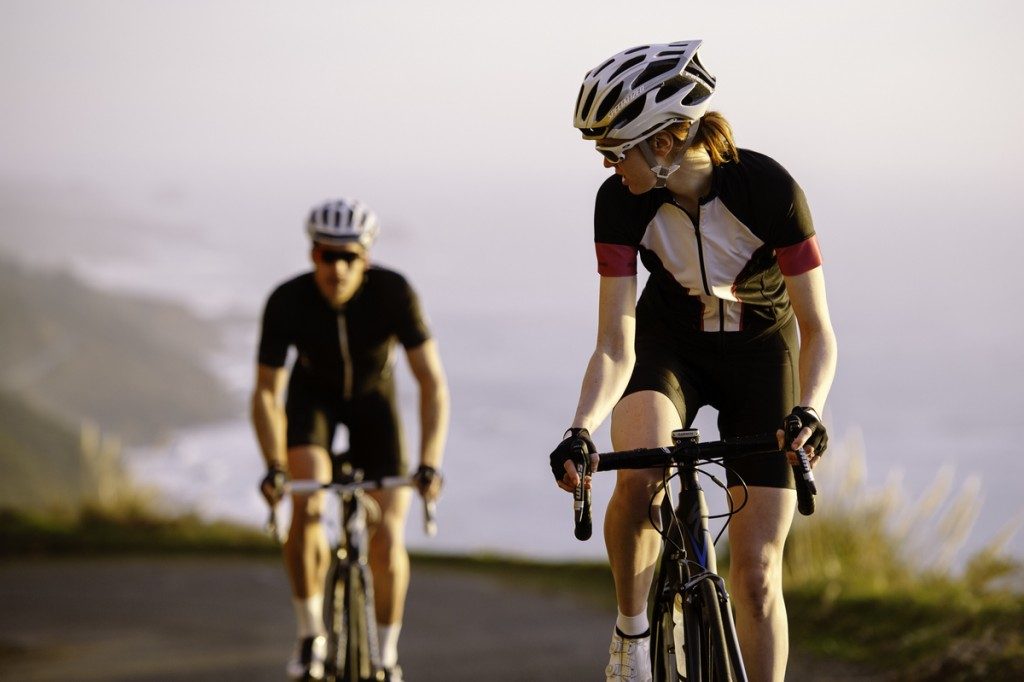 In an interview with Bicycling.com, pro mountain biker, Amanda Batty confessed she felt she wasn’t included in the cycling world, and was being pushed out by the “boys club” at Pinkbike. Each time she tried speaking out about eminent problems surrounding gender inequalities, she would become labeled as crazy, psychotic, and “feminist bitch”. This lack of inclusiveness and general defamation all resulted in her resignation, shining a not-so-pretty brand image onto the internal affairs of Pinkbike.

Upon launching their new line of women’s downhill mountain bikes, Czech Republic published an offensive advertisement that snubbed the female cycling masses. In the Summer of 2015, the description of the Modo line read, “Female cyclists do not generally need to push their limits, race against time, and increase their adrenaline when riding down downhill trails. They just want to enjoy the time spent in nature on the bike, and their expectations on the bike are completely different from the men’s. They look mainly for safe, easy, and of course, stylish bikes that have god, natural handling.” This ignorance and underestimation of a women’ 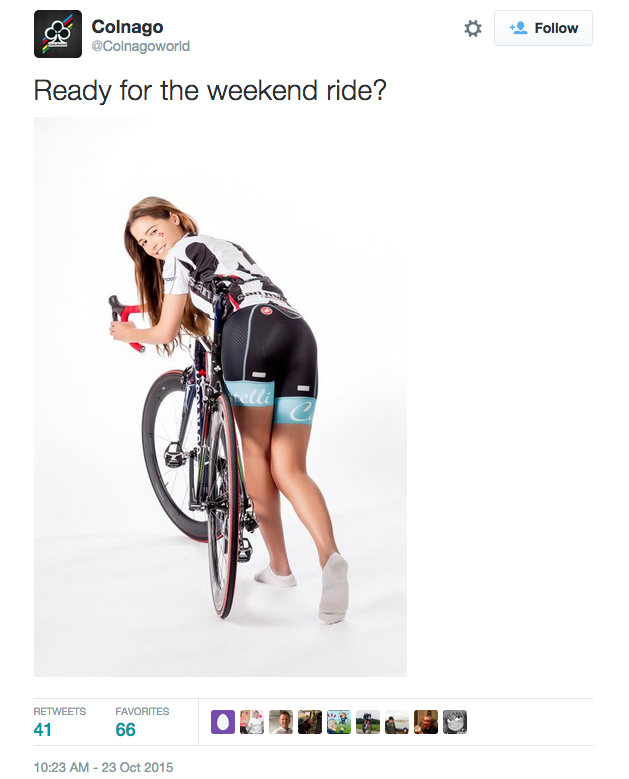 Colnago’s Facebook and Twitter advertisement carried a double entendre, featuring a picture of a young women provocatively leaning over a bike and the text, “Ready for the weekend ride?” After clear disapproval from both their female and male fanbase, Colnago eventually took this post down and apologized, while reiterating their clarification of their social media guidelines, but not without first deciding to blocking people on Facebook who criticized their post. 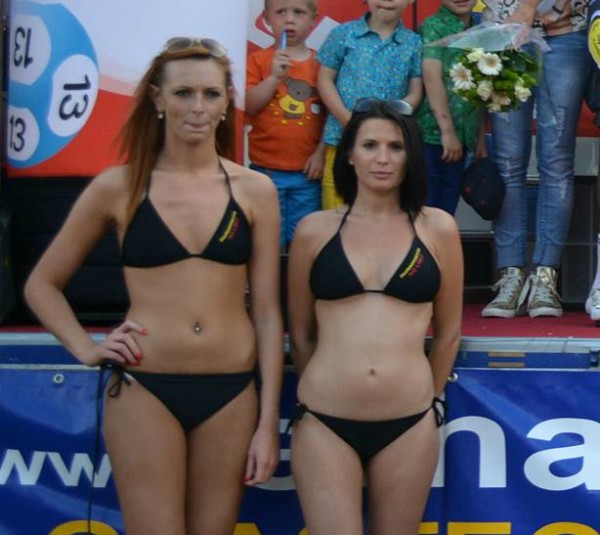 During the 2015 Flanders Diamond tour, a group of women in bikinis not only were present for the awards ceremony, but they were also seen circling the VIP area during the race. Last year’s race received so much backlash that the organizers, Lotto Cycling Cup, renounced future responsibilities of the organization of the podium. 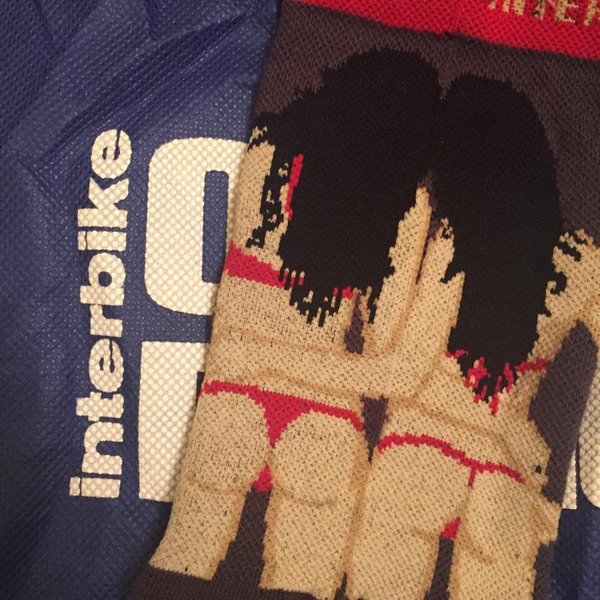 Goody bags are an essential benefit of any trade show. At Interbike, one of the biggest bicycling trade shows in the world, the expectation is no less. Last year, the Las Vegas show featured one half of a pair of socks with a rear view of two women outfitted in bikinis, encouraging attendees to visit the appropriate booth to claim the other half of the pair. These images put out by the bike industry create an environment that belittles women no matter what accomplishments or titles they have earned.