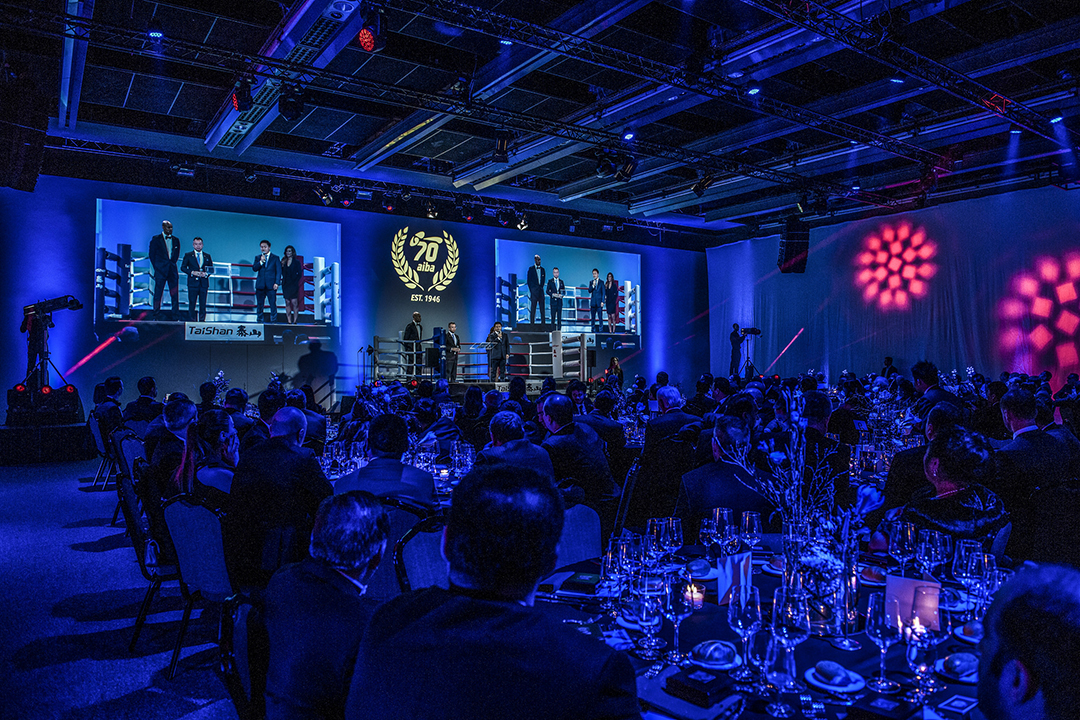 As AIBA celebrates 70 years as world boxing’s governing body, a new partnership with Taishan Sports Equipment will pave the way for an exciting future for the sport

As no stranger to change and innovation, AIBA announces a new partnership with China’s Taishan Sports to help maintain boxing’s reputation of popular, exciting, and forward-thinking. As the biggest sports supplier in the history of the Olympic Games, Taishan will use its experience and expertise to help AIBA promote the sport, specifically designing and tailoring equipment for the growing Junior and Women boxer demographic. In addition, Taishan will be helping to introduce cost-saving technology to improve the efficiency of National Federations, such as portable rings.

“AIBA is delighted to confirm our agreement with Taishan and we look forward to a long and fruitful partnership that will keep boxing on the frontline of innovations in sports technology. We have always embraced the evolution of equipment and it is vital that we discover ways of developing it in an affordable manner without compromising on the safety and comfort of our athletes. Taishan’s Olympic pedigree makes them the perfect partner for AIBA,” said Dr Ching-Kuo Wu, AIBA President. 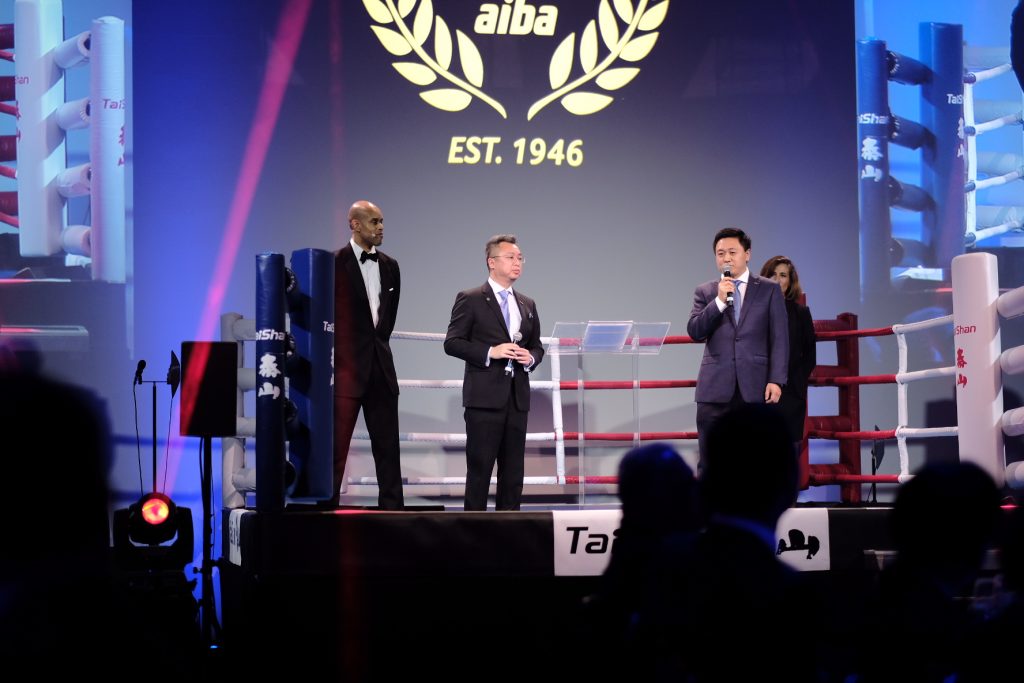 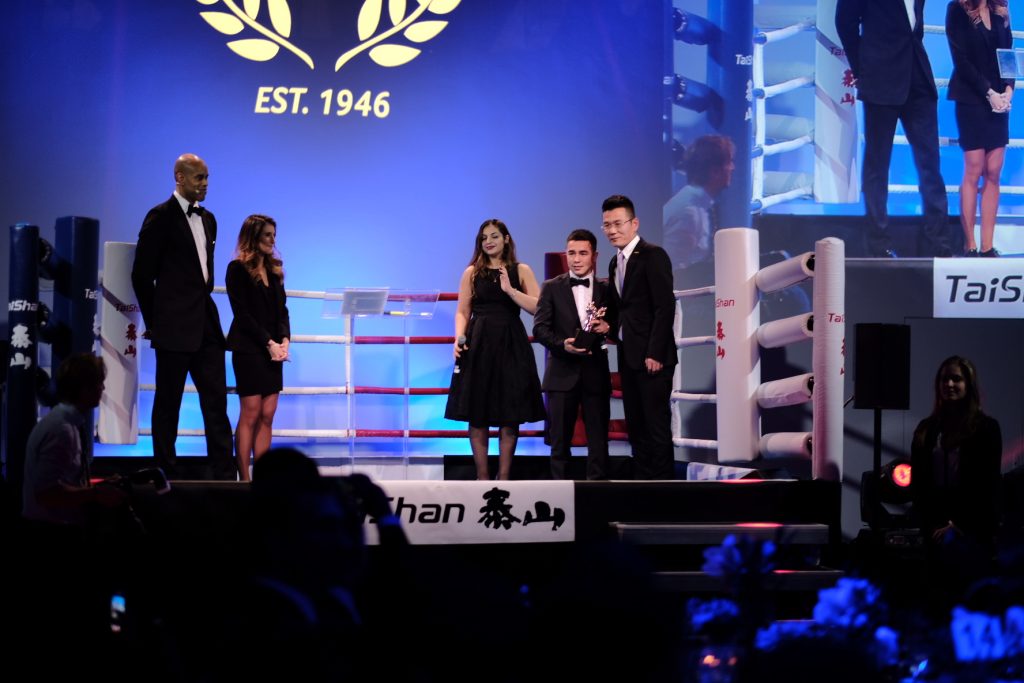 Taishan Sports presented their portable ring technology after the AIBA President of 10 years, Dr. Ching-Kuo Wu’s speech at the AIBA 70th Gala Dinner in Montreux, Switzerland today, December 20th. This 70th Anniversary Gala was attended by 250 representatives and top boxers from 83 countries. In Taishan’s opening, Taishan Sports United States’ CEO, Sean Peng, and Chairman of Taishan Sports Equipment, Mr. Cui Gang gave their opening speech as AIBA Gala sponsor and AIBA Global Innovation partner, and expressed that Taishan has national level R&D centers and its fully integrated production line will work together with AIBA partners around the globe to promote boxing. In addition to boxing promotion around the world, Taishan will also be assisting AIBA in promoting boxing in AIBA’s “Year of Africa” in 2017. Taishan Sports has great experience manufacturing and designing boxing rings, having supplied boxing rings for the 2008 Olympic Games. This new and innovative portable ring was set as the award ceremony stage for the Gala and will have an enormous impact particularly with smaller projects and gyms where space is scarce, as well as those NFs where cost efficiency is a priority, making the anniversary celebration an ideal opportunity to showcase the equipment to the AIBA family at large. Taishan has also been developing a series of other new innovative boxing rings including a smart boxing ring.

“We are honored to partner with AIBA in their 70th year, and to be a part of their highly innovative approach to boxing moving forward. Taishan has watched closely as President Wu has seen through a number of hugely important reforms for the sport, and we are excited at the prospect of using our R&D know-how to contribute to that positive ethos,” said Mr. Cui Gang, Chairman of Taishan Sports Equipment.

Following the opening festivities, Vikas Krishan, former Asian Games gold-medallist and two-time Olympian, was awarded the “Best Boxer” award by the International Boxing Association for his outstanding performance in 2016.

AIBA president wrote to him, “In recognition of your achievements throughout the year, AIBA would like to use the occasion to present you with the 2016 AIBA Pro Boxing (APB) Best Boxer award.” 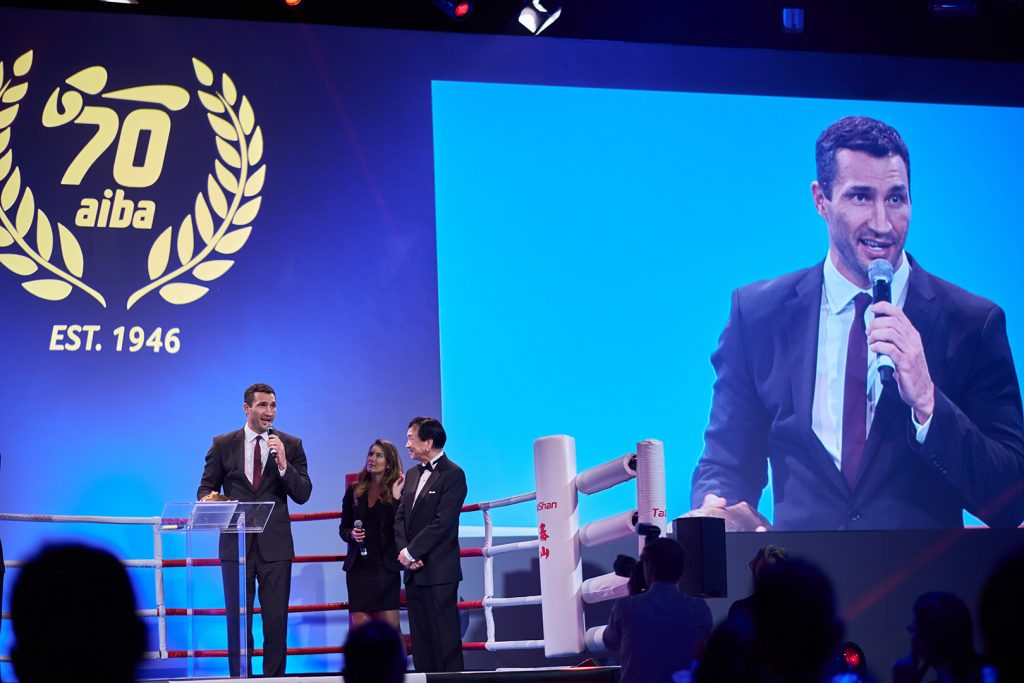 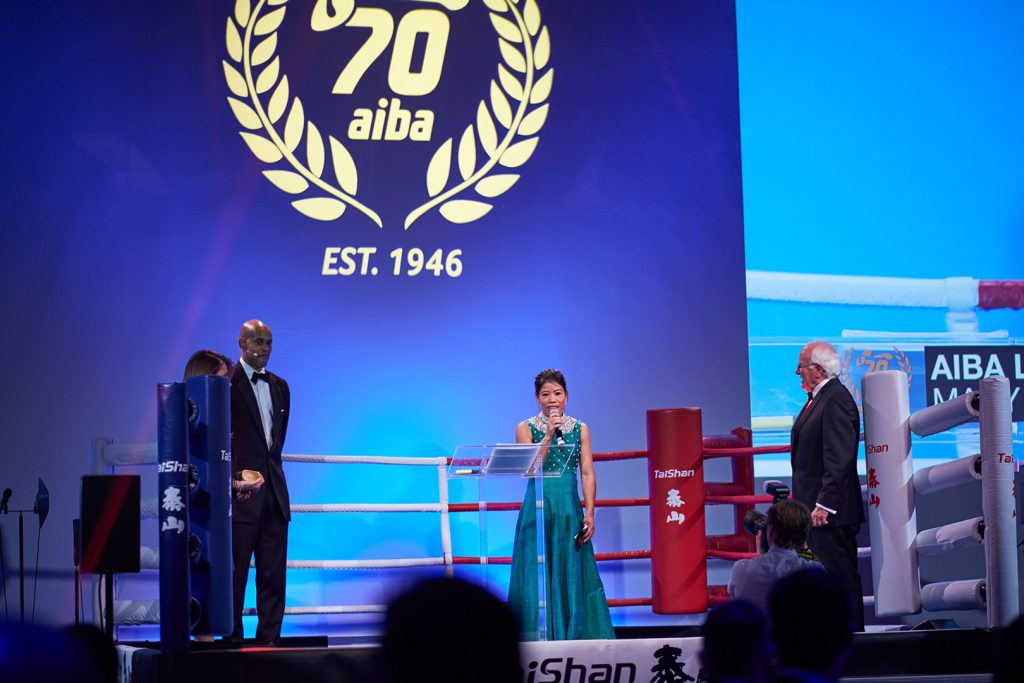 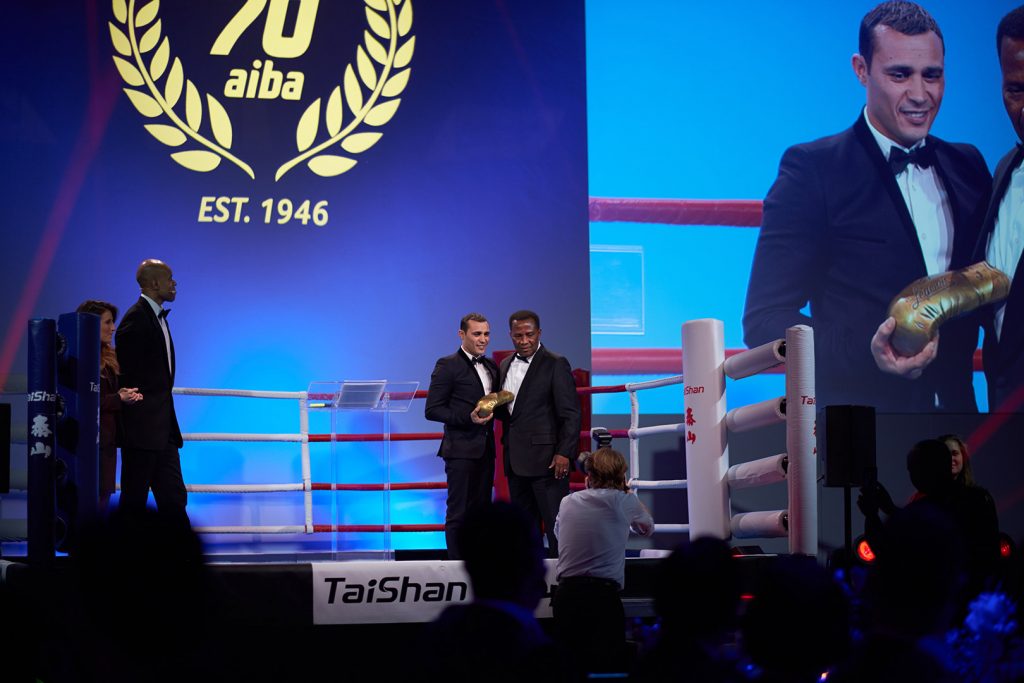 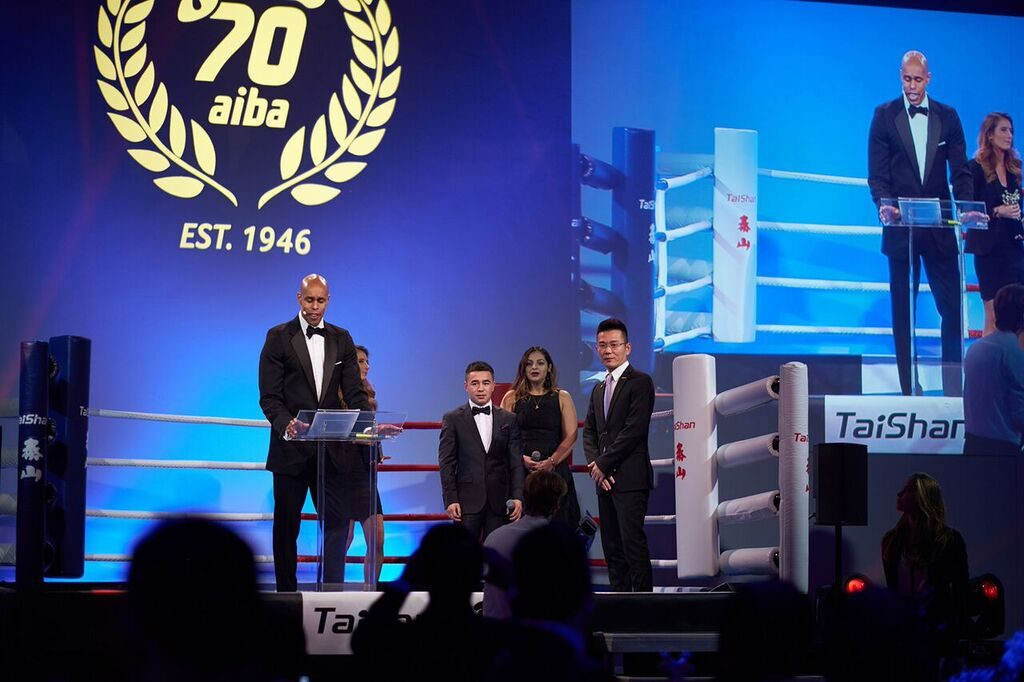 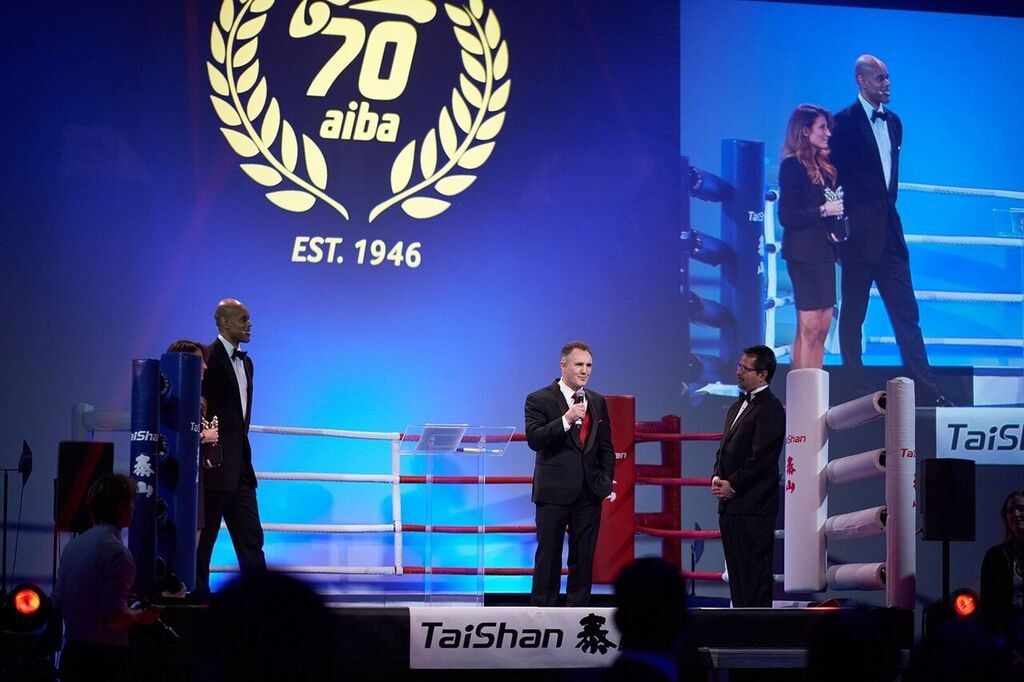 During this year’s award show, AIBA launched their new Legends program, honoring boxing icons and role models who emerged over the past 70 years. Among these included Ukraine’s Wladimir Klitschko, India’s MC Mary Nom, and France’s Brahim Asloum. Additionally, the life of Muhammed Ali was honored and remembered with AIBA’s first Greats Award.

Wladimir Klitschko said he was “honored to be one of the first recipients of the AIBA Legends award. [His] journey with AIBA began when [he] was 14 years old and boxing has given [him] so many positive experiences since then.”

Uzbekistan’s Light Flyweight Champion, Hasanboy Dusmatov, and Britain’s Olympic Champion of the Women’s Light Flyweight, Nicola Adams, both won the Boxer of the Year award.  While Coach Billy Walsh was recognized as Best Coach of the Year following his success with the U.S. team, and Cuba’s Domadores won Best WSB Team.