The Birth of a Worldwide Sensation- Taishan Sports 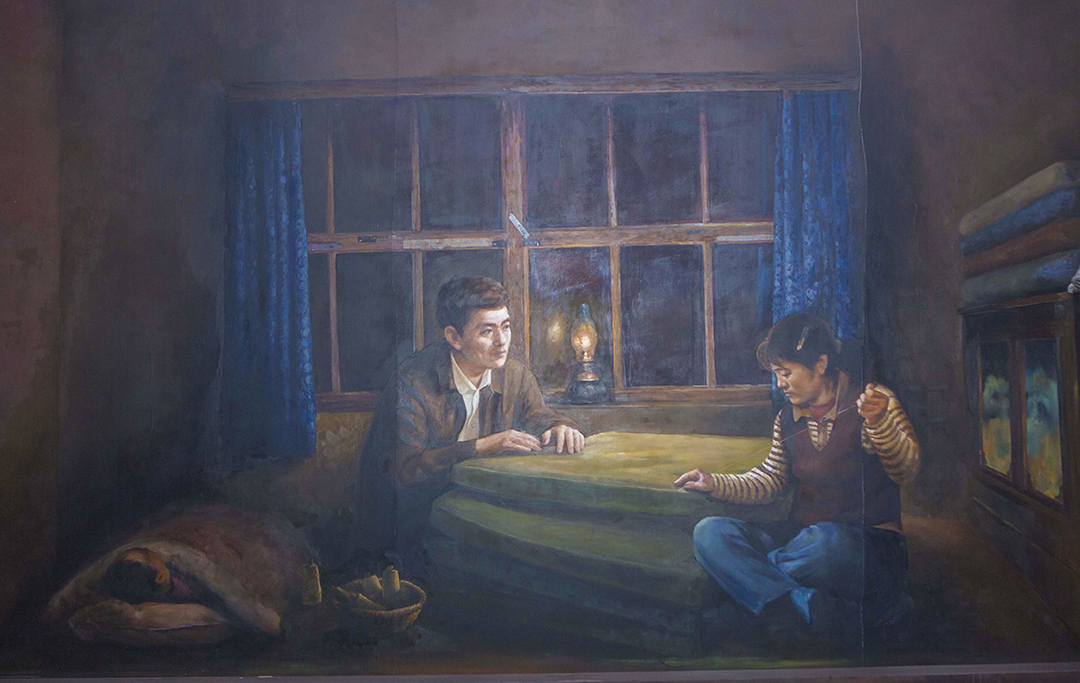 31 Jan The Birth of a Worldwide Sensation- Taishan Sports

Ever wondered how we first got started? Let’s take a walk down memory lane.

Taishan Sports first started one night in 1978, when Chairman Bian was sitting on his stiff brick bed with his wife, frustrated with their sleeping conditions. Not wanting to lose even more sleep, the Chairman and his wife struck a brilliant idea to use a foam mat to ease the tension off their backs. After hours of hand-sewing their mats into their brick beds, and a good night’s rest of course, they quickly saw the early potential these mats possessed.

The Chairman’s very first business opportunity was with a police school in Jinan. The moment the school identified the need for gymnastics mats, Chairman Bian traveled there to observe their current training routines and mats used. He guaranteed he could help them produce inexpensive gym mats that were adequate for their needs, and after much deliberation, they agreed to let him make them a sample first. Chairman Bian rushed home to put together the finest gymnastic mat he could, and the police school officials immediately placed an order of 10 mats after they examined his sample. At that time, their production staff consisted of two people: The Chairman and his wife. Being short on personnel and wanting to fulfill their delivery commitment, Chairman Bian personally rushed a small donkey cart to deliver the mats. After three days, the mats were delivered successfully and Chairman Bian netted 2,000 yuan.

In order to actively promote his “Taishan Bian Zhiliang” brand, he traveled all over the world to sell his mats. While he didn’t have much money at the time, he still bought himself a suit to establish a good brand image. He greatly cherished his first suit from head to toe, even only taking his leather shoes out of his backpack and wearing them to meetings with potential clients. 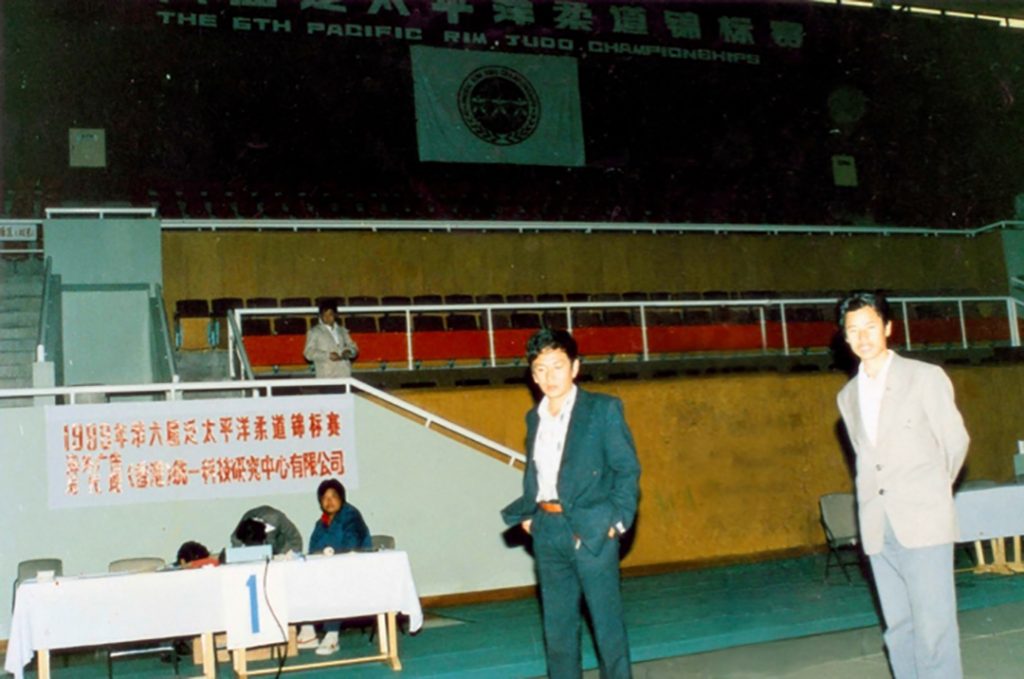 Through hard work, determination, and innovation, Chairman Bian developed manufacturing processes which allowed our world-renowned mats to go global. Taishan Sports mats formally came into competition venues in the Beijing Trans-Pacific Judo Championship in 1989. While the organizing committee was preparing for this competition, they realized that they were in a deep shortage of mats. The Chairman of the committee, Chairman Yilang, found two Taishan mats which had great quality and resilience. Chairman Yilang said to Chairman Bian, “Why are we still importing if we already have such good mats like these?” Since then, Taishan mats were brought from the training fields to the competition fields.

In 1990, Taishan Sports Industry Group then became the official equipment supplier in the 11th Asian Games in Beijing. Taishan not only supplied gymnastics equipment, but they also supplied judo, boxing, and taekwondo equipment to further enhance their brand awareness.

On July 31, 2001, the IOC President Juan Antonio Samaranch named Beijing the host city of the 2008 Olympic Games. Thanks to this information, Chairman Bian began racking his brain that same night to come up with ideas that would help make Taishan stand out from the rest of their competition. He realized that since The Olympic Games have an extremely high threshold, their suppliers must be able to provide products manufactured from top technological processes. From then on, Taishan’s research funding doubled every year. 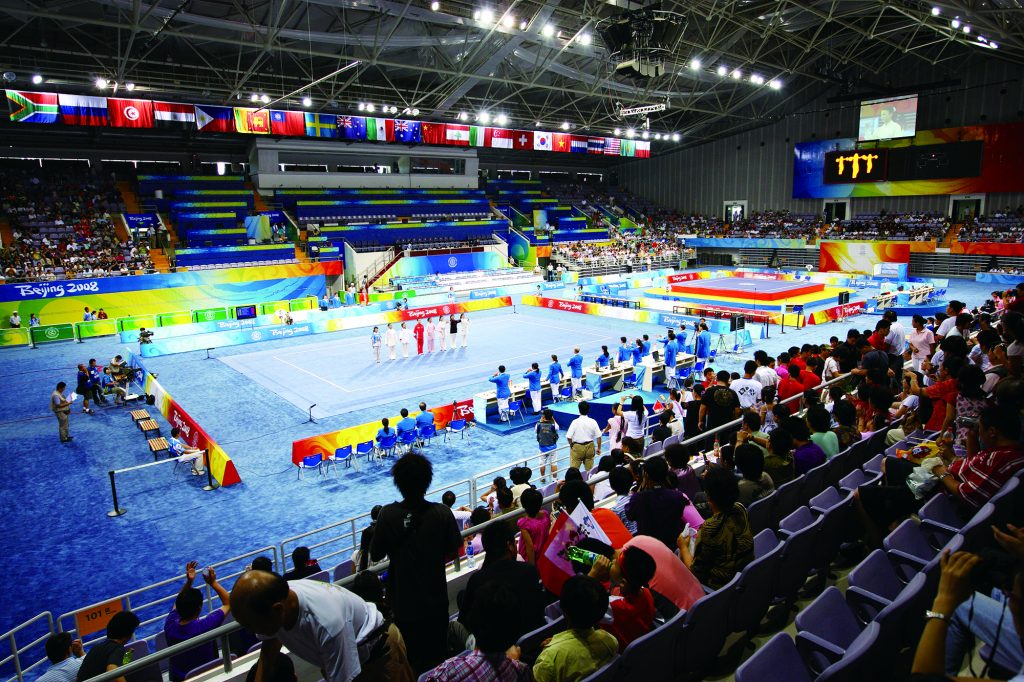 During the 2008 Beijing Olympics, Chairman Bian had the privilege of being the ninth torch bearer during their opening ceremonies. Additionally, Taishan provided equipment for 6 of their major categories, including Boxing, Karate, Judo, Wrestling, Wushu, and Wushu performances. Thus, earning a reputation of having “zero error, zero malfunction, and zero complaint”.

Although the Beijing Olympics ended, the Olympic spirit will never be forgotten! To ensure people all around the world could enjoy sports regardless of race, color, and gender, Taishan Sports Industry Group’s mission has since then become: “Helping world enjoy sports!”